Part of the State of Jefferson Kiteboarding Guide

Aerial view of Mt. Shasta from the northwest.

Mount Shasta is located in the Cascade Range in northern California about 65 kilometers (40 miles) south of the Oregon-California border and about midway between the Pacific Coast and the Nevada border. One of the largest and highest of the Cascade volcanoes, snowclad Mount Shasta is near the southern end of the range that terminates near Lassen Peak. -- Miller, 1980

Mount Shasta, a compound stratovolcano rising 3,500 meters above its base to an elevation of 4,317 meters, dominates the landscape of northern California. ... Mount Shasta hosts five glaciers, including the Whitney Glacier, the largest in California. Shastina is a large subsidiary cone that rises to 3,758 meters on the west flank of the compound volcano. ... -- Christiansen, 1990, IN: Wood and Kienle

The snowkiting potential on Mt. Shasta and surrounding public land is immense. Limitations on the mountain are mostly access issues made challenging due to wilderness restrictions. These same restrictions guarantee some solitude if you are willing to work for it. Backcountry skis, split snowboard, snowboard and or snowshoes are the tools of choice for winter wilderness access. Please note, kites are not permitted within the wilderness boundries which still leaves much open terrain.

At lower elevations, after the snow pack becomes adequate, snowmobile trails outside the wilderness boundary provide access to vast and varied snow covered public lands. The US Forest Service grooms a portion of the hundreds of miles of snowmobile trails with funding from California OHV fees. These same trails can be used for ski access but you are sharing the trail with snowmobiles which can be hazardous. Weekdays are the best bet if utilizing this trail network under human power.

December through April depending on snowpack.

Bunny Flat - Old Ski Bowl: The most accessible kite locations are reached from the top of Everett Memorial Highway which terminates at Bunny Flat in the winter. Take the central Mt. Shasta exit off Interstate 5 and travel east (15 miles) towards the volcano and you will end up on Everett Memorial Highway and eventually Bunny Flat. Bunny Flat is not the best destination for kiting because it is located next to a busy parking lot, offers limited space and is somewhat sheltered. Old Ski Bowl, accessed from the Flat, offer wide open bowls and semi-flats and is the kiter's choice. This location is best on westerly or southwesterly winds. To reach Old Ski Bowl continue east over snow from Bunny Flat on the unplowed road for about 1.75 miles to the Old Ski Bowl. 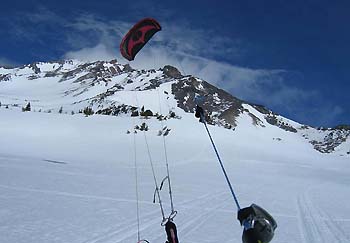 The lower part of Old Ski Bowl tends to have clean wind because of less topographic influence. Old Ski Bowl is outside the wilderness boundary and can be overrun with snowmobiles at times. If using a snowmobile, the Snowmobile Parks mentioned below are a better choice than Bunny Flat and here's a few reasons why. Bunny Flat parking can be crowded and difficult with a trailer. Road conditions are usually worse on the mountain the higher you get. Machine noise and fumes in close proximity to a wilderness area are not especially appreciated.

Snowmobile Parks: Mt. Shasta area Snowmobile Parks are great staging areas to gain access to snowkite terrain within Shasta-Trinity and Klamath National Forests. One area of note is Jack Rabbit Flat, about half way between the two Parks mentioned below. As the name implies, this is a wide open flat which gets fairly clean wind. However, this flat can be cut up from snowmobile traffic.

Deer Mountain/Chuck Best Memorial Snowmobile Park: On the northeast side of Mt. Shasta, 10 miles northeast of Weed on US-97 turn south onto USFS Road 42N12 (Deer Mt Road), continue 3 miles to Park. If you want to rent a snowmobile this is the place. Contact The Fun Factory Snowmobile Rentals for more information.

Pilgrim Creek Snowmobile Park: This Park is on the southeast side of Mt. Shasta and is located off Highway 89, 33 miles east of McCloud turn onto Pilgrim Creek Road and travel 5 miles north to the Park.

Backcountry travelers should make terrain, weather and snowpack evaluations as they travel over snow covered terrain. Remember that seemingly insignificant slides may be dangerous. Almost half of all avalanche fatalities occur in slides traveling less than 300 feet! 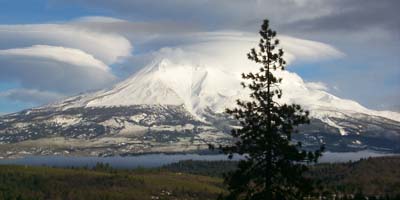 Several commercial campgrounds can be found nearby. Camping is allowed on public lands.

Mt Shasta, Weed and Dunsmuir offer a variety of lodging options including motels and B & B's.