A guide to Kite Zombies home turf, surf and more.

The State of Jefferson Kiteboarding Guide is an evolving resource for local and visiting kiteboarders and includes parts of Northern California and Southern Oregon. This is a large, diverse and sparsely populated geographic area. This makes for relatively crowd free kiteboarding in fantastic settings ranging from powerful Pacific surf to snowkiting on massive Cascade volcanoes.

The geographic scope of the SOJ kiteboarding Guide will focus on what has been referred to as the State of Jefferson. This is a somewhat "mythical" area and may be as much a state of mind as it is topography on a map (see links below for more info). Originally the State of Jefferson was proposed to include the Oregon counties of Curry, Josephine, Jackson, and Klamath and the California counties of Del Norte, Siskiyou and Modoc. Modern versions of the movement usually include other adjacent counties within both states. If passion and energy persist, I hope to expand this guide to include other nearby kiting areas. Your help is welcome and appreciated, so please feel free to provide input or suggestions for this guide. 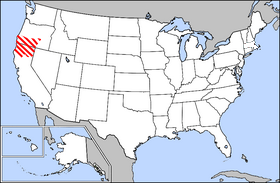 The State of Jefferson highlighted in red.

Learn more about the mythical State of Jefferson:

State of Jefferson as explained by Wikipedia.org